The Parish Church of Steventon is St Nicholas, situated some distance away from the village at the top of a small country lane opposite the site of the old manor House. St Nicholas was originally built around the year 1200 and, apart from some limited 13th, 15th and 19th century alterations, has stayed much the same since it was first built. The church is used regularly for worship and is well known for its associations with Jane Austen, born in Steventon in 1775, being the single most important building left standing in Steventon which relates to her. Her father George Austen, two of her brothers James and Henry, and her nephew William Knight were all Rectors of Steventon. Jane was baptized in St. Nicholas.

Some restoration work was carried out in Victorian times including the stained glass windows and much of the roof structure was rebuilt. The pews, pulpit, organ and choir stalls were added and the church was redecorated internally. The spire was also added. Recent renovation has lovingly restored some of the William Morris style decoration to the chancel arch and highlighted some Medieval wall paintings.

The church community plays an active part in local community life, including Steventon Players, Singers, and Strummers. There is an annual village fête,  monthly coffee morning 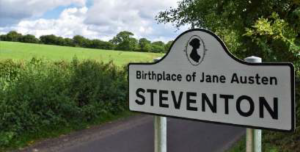 s, and seniors’ Christmas lunch. The boundary between ‘church’ and ‘village’ activity is often hard to discern. To nurture the Jane Austen heritage, villagers meet and greet many visitors to the church encouraging community involvement. In 2017, church and village  commemorated the 200th anniversary of her death with a festival of various events raising funds for the church and drawing church and village closely together.